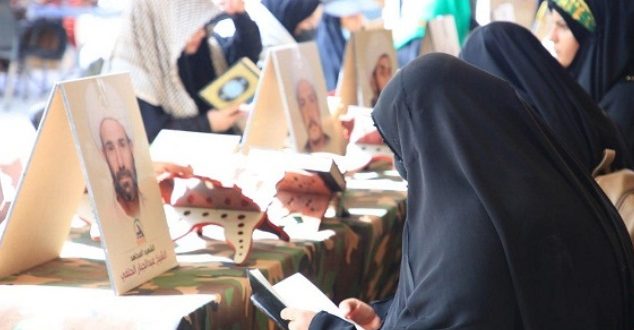 The Religious Office of Iraq’s Popular Mobilization Units (PMU)- also known as Hashd Al-Sha’abi, has organized various cultural, religious and Quranic programs for Arbaein pilgrims including recitation of one page of the Holy Quran.

The programs started on the 12th of the lunar Hijri month of Safar (September 30) with holding Quranic sessions and mourning rituals.

The pilgrims are invited to the Moukebs, set up by the office on the roads towards the holy city of Karbala, to recite one page of the Holy Quran as a gift to martyrs.

Questions and doubts of the pilgrims on religious issues are also answered in the Moukebs by religious experts.

The programs are held under the supervision of Sheikh Hassan Al-Asadi, a member of the office and a number of Iraqi Quran experts and religious scholars.

The symbolic graves of martyrs Qassem Soleimani, Abu Mahdi Al-Muhandis, and other Hashd Al-Sha’abi martyrs as well as photos of martyrs have been put on display in the Moukebs and booklets on biography of the martyrs are presented to the pilgrims.

A number of religious figures including Ayatollah Seyyed Mujtaba Husseini, representative of the Leader of the Islamic Revolution in Iraq, Sheikh Foad Al-Miqdadi, from Iraq’s Union of Muslim Scholars and Haj Ali Al-Hamdani, an Iraqi commander have also visited the Moukebs.