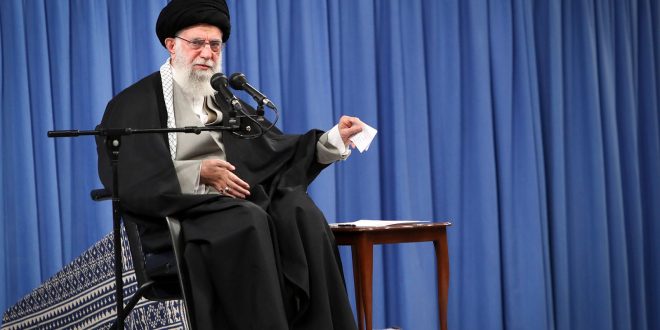 Missile Attacks A Slap in Face of US: Leader

Leader of the Islamic Revolution Ayatollah Seyed Ali Khamenei said Iran’s missile attacks against US forces in Iraq following the assassination of General Qassem Soleimani was just “a slap”.

On the anniversary of people of Qom’s January 9, 1978 uprising, thousands of people from Qom met with the Leader of the Revolution, Ayatollah Khamenei, this morning January 8, 2020.

While meeting with the people of Qom this morning, the Leader of the Revolution paid tribute to the uprising of the people of Qom during the Revolution and stated, “This ceremony is being held auspiciously every year since forty or forty-one years ago. On January 9, the people from across the country look forward to the ceremony held by the people of Qom, on the significant and historical event.
Regarding the January 9 event (1978), we should think and learn lessons. Most of you, brothers and sisters present here, did not see that day. Yet, the memory of that day is alive. We should learn the lessons. The past should be used to guide us as a light in the path toward the future.”

His Eminence added, “On January 9, the people of Qom stood before the merciless armed forces of the [Pahlavi] regime, to defend the great Marja’, the honourable leader of the Revolution, who was not in Iran at the time. The people had no arms in hand. What drove them to engage? Faith and religious zeal. These are two keywords: faith and religious zeal. When those people of Qom came to streets and confronted the police and the regime’s forces, and some of them were martyred, some others injured; while the regime’s agents assumed they were obliterated; neither the uprising people of Qom nor others imagined this move could be the prelude to such a huge transformation—not only in our country but also in the world did anyone imagine that.”
Ayatollah Khamenei hailed the religious faith of the people of Qom that unleashed their uprising prior to the Islamic Revolution and asserted, “That move on that day which was carried out by the people due to their faith and religious zeal, was fortified by Exalted Allah, continued; and was followed by people’s turnout on every arbaeen

[periods of forty days after the martyrdom of the killed protesters]

. The honourable Imam Khomeini led the people, and it finally resulted in the extensive uprising of the people in next year’s Bahman [February], in 1979. So the move by a number of the sincere people of Qom initiated such a great revolution.”

In meeting with thousands of people in Qom, Imam Khamenei regarded Iran’s missile attacks on two American bases in Iraq as a slap and stressed that the main opposition involves ending the corruptive and detrimental presence of the U.S. in the region. He stated, “One of the great blessings from Hajj Qasem Soleimani’s martyrdom and spirituality was the enthusiastic turn out for the funeral ceremonies held in different cities in Iran and Iraq. These ceremonies for escorting him manifested to the world that the Islamic Revolution is alive, and I feel humble at what the great soul of this dear martyr granted to Iran and the region.”

Referring to the martyrdom of the honourable Commander of Islam and Iran, Hajj Qasem Soleimani, Imam Khamenei called the dear martyr a good, honourable and brave friend who ascended into the Higher Realm with felicity.

The Leader of the Revolution described Major-General Martyr Soleimani as having the two outstanding qualities of courage and wisdom.

Imam Khamenei went on to say, “From the time of the Holy Defense till the end of his life, Hajj Qasem would bravely enter the middle of danger. Meanwhile, he acted wisely, with thought, and logically. Not only in military fields but also in the area of politics, he enjoyed courage and wisdom at the same time.”

Referring to General Soleimani’s careful attention in safeguarding his companions, comrades and colleagues, the Leader of the Revolution added, “An important characteristic of Hajj Qasem was that in domestic affairs he was not involved in any party or other divisions, rather he was vigorously revolutionary and a strong adherent of the shining and blessed path of Imam (Khomeini).”

Neutralizing all the illegitimate plots of the U.S. in West Asia was mentioned by his Eminence as an example of the wisdom and courage of Martyr Soleimani, and he stated, “The enemies of Hajj Qasem are well aware of this fact.”

On this same topic, Imam Khamenei added, “Hajj Qasem stood up to all the plots formed with the use of the Americans’ money, capabilities, political influence and extensive organization and rendered them all null and futile.”

Noting the unprecedented impact of General Soleimani on the matter of Palestine, His Eminence added, “The Americans were trying to make the matter of Palestine be forgotten, and do something to weaken the Palestinians so that they wouldn’t have the courage to fight. However, this great man filled the hands of the Palestinians (empowered them) and gave them the courage and ability to fight. Referring to the frequent affirmations of this fact by Palestinian leaders, the Leader of the Revolution added, “What Hajj Qasem did, enabled a small region like Gaza to be able to stand up to the pretentious Zionists in such a way that the Zionist Regime was forced to request a cease-fire after just 48 hours.”

Concerning the determining role of Major-General Soleimani in defeating the plans of the U.S. in Iraq, Imam Khamenei added, “The Americans wanted Iraq to be either like the Taghut (tyrannical Pahlavi) regime, or some other such regime as the Saudis, whom they say are like milking cows. But, Hajj Qasem helped the devout Iraqi agents, the brave Iraqi youth and the Religious Authorities in Iraq to stand up to this plot and nullify it.

The Leader of the Revolution added, “In Lebanon too, the Americans wanted to deprive Lebanon of its most important factor for independence, which is the Hezbollah so that the Zionists could easily occupy defenseless Lebanon like they had some other regions. However, the Hezbollah became more powerful day after day to the point that today they are both the hand and the eye of Lebanon. Our courageous, wise martyr played a major role in making this possible.” Emphasizing that today the nations are awake, his Eminence maintained, “Martyr Soleimani, along with his dear companions such as Martyr Abu Mahdi Al-Muhandis, the devout, courageous and luminous man, were able to achieve great results.”

Imam Khamenei regarded the abundant blessings and the enthusiastic turn out for the funeral of the honourable martyr and his companions to be the result of his spirituality and said, “You witnessed the farewell ceremonies held in Iran and Iraq – in Kadhimiya, Baghdad, Najaf, Karbala – and the funeral ceremonies. I deeply thank the pure soul of the honourable martyr.”

Stressing that the martyrdom of Hajj Qasem Soleimani and the unprecedented funerals manifest how “the Revolution is alive” to the world, he reminded, “Hajj Qasem’s martyrdom showed that the Revolution is alive, and everyone saw the passionate turn out in Tehran and other cities. The Iranian nation, with their extraordinary turnout for his funeral, slapped the unjust, lying, rambling enemies and American officials in the face. They try to portray this great Mujahid, Commander, and one who led the fight against terrorism as a terrorist.”

Referring to Iran’s missile attacks on the American terrorist military bases in Iraq this morning, Imam Khamenei stated, “The matter of revenge is another thing. They were slapped last night, but such military actions are not enough in countering them. The corruptive presence of the U.S. in the West Asian region must be stopped.”

Stressing that undoubtedly the people of the region and the governments elected by nations won’t accept the corruptive presence of the US to continue, the Leader of the Revolution asserted, “Their presence here and everywhere else in the world, has had no results other than wars, division, sedition, destruction, and the demolition of infrastructures. Therefore, their presence in the region must end.”

Imam Khamenei stressed that the enemy is constituted of the U.S. government, the Zionist regime and a number of companies, plunderers, and oppressors in the world under the name of the System of Arrogance. He added, “Some of the governments, inside or outside the region, should not be regarded as a part of the enemy as long as they haven’t made a move in favour of the enemy.”
The Leader of the Islamic Revolution recommended again for all to be vigilant in the face of the enemy’s plots and remember the basic principles of ‘Islamic and revolutionary intellectual concepts’ and ‘national unity.’ He maintained, “The unity formed under the coffin of the pure body of Martyr Soleimani and the other martyrs should be protected. The people should be revolutionary and continue to respect the revolution’s men, martyrs and the individuals who remind of the Revolution’s values.”

Stressing that the hostility of the enemy’s front against the Iranian nation is permanent and inherent, not occasional and short-lasting, he continued, “The solution is for us to make ourselves powerful in all political, economic, military and security areas so that the enemy cannot strike us. Therefore, for some people to imagine that if we take one step back or compromise a little, the Americans will stop their hostility, this is an excessive mistake.”

Imam Khamenei also referred to another mistaken analysis, which is ‘don’t do anything to make the Americans angry,’ and said in reply, “These words are exactly the opposite of what Allah states in the Holy Quran. It states that the development of devout youth and individuals is essential for making the enemies angry. Of course, they are angrier with these young people who are successful in the areas of science, Jihad, services and the military more than anything else.”

The Leader of the Revolution regarded the measure enacted by the Islamic Consultative Assembly (Majlis) yesterday against the terrorist US regime as appropriate and added, “The Iraqi Parliament’s decision to expel the U.S. was also very good. We hope that Allah will assist them in pursuing this measure.”

Imam Khamenei referred to the divine promise that a small group can defeat a huge front, if Allah desires it, and stated, “The condition for the realization of this true, divine promise is faith and religious zeal.”